I'm pleased to welcome historical fiction author Janet Roger to Col’s Criminal Library. Janet was kind enough to answer a few questions for me about her debut novel, Shamus Dust.

Your novel, Shamus Dust has just recently been published, can you pitch it to readers in a short paragraph?

Well, I thought a reviewer nailed it wonderfully just recently, and in a record few words. He said, Imagine Polanski’s masterpiece, Chinatown played out against the bomb sites and grimy alleys of a freezing 1947 London. I don’t think I can do better.

Is Shamus Dust your debut or have you been published previously?

It’s my first. Long ago, among other things, I was an Eng. Lit. graduate, which can either inspire you to write fiction of your own or daunt you because you’re aware of what went before. I was in the daunted class.

Did it involve a lot of research in respect of the location of events in the book and the post-WW2 time frame?

Yes, I suppose it did mean a lot of research, but at the time it was on my doorstep. When I came across the events that prompted Shamus Dust, I was living and working in the City of London, and I should probably explain a little about that. The City is the capital’s financial center, sometimes called the Square Mile, London’s Wall Street if you like. And it really is, more or less, the single square mile contained inside the arc of its ancient Roman walls. Its southern edge runs along the Thames shore, you can walk the sights easily, and the history is so crammed to overflowing it’s hard to escape. When I realized there was a story there, research was something I tripped over in the street every day.

Did you enjoy that aspect of the writing, or was it tedious - a bit like having to do your homework before going out to play?

Not at all. Basically, I can’t walk past a museum or bookstore, so Shamus Dust gave me the best-ever excuse, a marvellous time doing the things I enjoy most. Anyway, I always absolutely loved doing homework. Didn’t you?

How long from conception and the germ of an idea for the story until eventual publication did the book take?

Don’t ask! It’s a story that was written and then put aside in a drawer for ages. When it reached the top of the pile again and I had time to reconsider, I’d long ago left the City, London and England. To give you an idea, that research you asked about was done pre-internet. So it’s just as well I’m a museum and bookhound, because when Shamus Dust first saw the light there really was no other way.

Was there one particular seed or thought or event that inspired the book?

Yes there was. But I’ll need to explain some Cold War history, when much of the City was still flattened rubble after wartime bombing. For a few short years it was archaeologists’ dreamland. Those blitz sites gave them unimagined access to the two-thousand years old Roman city beneath their feet. They wasted no time. Before reconstruction got seriously under way they’d made monumental discoveries: a Roman temple, a Roman fortress on the line of the wall, even the foundations of an arena - a Roman coliseum, no less. And there was the puzzle. Because the discovery of the temple and the fortress made instant splash headlines. Yet London’s very own Roman coliseum - yes, there really is one - was overlooked and entirely forgotten about. It wasn’t until a rainy day, almost forty years later, that the drawings in the archaeological record were noticed again. My thought when I learned about that was, Really?

Was it a smooth process or were there many bumps in the road along the way?

It’s more that it was the thing that always got put aside when a million and one other things crowded in. In some ways I enjoyed having it there on the back burner. On the other hand, like the rest of life, when you can’t see a way to sort out a problem it’s giving you, it drives you to distraction.

Is Newman’s race run or are there plans for further cases involving your PI? (I’ve not yet read the book, so I’m assuming he doesn’t die along the way!)

Let’s say he dies a little. There is a sequel on its way called The Gumshoe’s Freestyle, set in the summer of ’48, that ties up some loose ends and develops some of the characters from the first story. It’s foreshadowed near the close of Shamus Dust, though you really need to know your Chandler to spot it. I liked the idea of an oblique link between cases that Newman and Marlowe will never know they share an interest in. That said, Freestyle gives Newman an entirely new case and will stand alone. It’s been interesting deciding which characters to revisit, how fleeting or important they’ll be, and of course, how to introduce them to readers who don’t already know them from the earlier tale.

I’m guessing writing the book is only half the story, was it a tricky road to publication?

Everything else in life stops. The question is for how long. When I know the answer to that I’ll know whether I ever want to do it again, because the thing is, I rather like the rest of life.

On your writing in general, do you have a typical writing schedule?

I can’t even imagine how a schedule would work, always quite happy to write nothing for months on end and then do nothing but, when the spirit takes me. I have a mortal terror of routine. It drives me completely nuts. And since I’m an unmitigated itinerant of long standing, writing gets done on the hoof like everything else, wherever I happen to be - in hotel rooms and apartments, in sleeping cars on trains, cabins on ferries and freighters - you name it. But then, as Newman puts it, …you can’t always have your moments of clarity over sherry in the library.

Do you plot meticulously, or is the process more fly by the seat of your pants and see where the story and characters lead you?

The latter, scene by scene. It’s not that I don’t plot and plan, just that I’m very good at ignoring the results. Not always, but often the hardest part is deciding the scene. I mean the when and the how of it, who’s involved and where the story is headed. I have no time at all for scenes (my own or anyone else’s) that simply park the narrative, characters and setting to no purpose. A recent review really delighted me when it said, “Don't make the mistake of skimming anything, there's a lot on every page and all of it is important. Don't blink or you might miss something …” Mostly though, once I’m decided about a scene’s function, the first draft writes fairly straightforwardly. Of course there are exceptions, and my feeling is that when that happens, the chances are I’ve made a wrong call, better go back to square one and rethink. We’ll draw a veil over the endless editing.

Any unpublished gems in the bottom drawer of the desk?

Not anymore. Think of Shamus Dust as my published gem.

Is there any advice you can offer other prospective authors?

I think I’m temperamentally too method-free to be the one you should be asking about this I’d say, Don’t take your writing (or yourself!) lightly. But then, coming from me that’s more of a general prescription for life. So I’ll borrow a title from Joan Didion (see below, she’s in the list of my last five reads) and instead say, Play It As It Lays. Which is just 1970s cool for Know Thyself. In short, I can offer nothing so grand as advice. But, as a suggestion, be pragmatic and do your own thing. After all, in the end what else is going to work?

What’s the best bit of advice you ever received?

Not sure about best ever, but I like this from one of Chandler’s letters: “Writers … have to fight the impulse to live up to someone else’s idea of what they are.”

Is there one all-time favourite book you wished you had written?

Apart from the usual suspects, there is one very slim one - I’m guessing at hardly more than a hundred pages - that I’d have given my writing arm for. It gives the impression of being written easily and fluently, it’s that good. You’ll read it in an afternoon. And forget the 1961 movie, it’s a travesty. Truman Capote’s original Breakfast at Tiffany’s is lyric, sparkling, spare and unsentimental about its heroine, who goes her own way first and last, entirely her own woman. Such a shame then that Paramount didn’t serve Capote anywhere near as well as Universal served his childhood friend, Harper Lee. To Kill a Mockingbird reached the big screen the following year.

What are the last five books you’ve read? 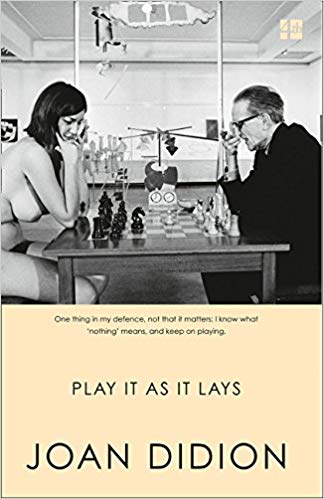 I was interested to look back and find this out myself. Thank you for asking. And what a mixed bag! Perhaps there’s something Freudian in that, but I wouldn’t know. I won’t try saying something about them individually; I’ve reviewed them all on Goodreads and there’s a click through below. Suffice to say that I’d recommend each and every one, for reasons that are worlds apart. Here’s the list: Play It As It Lays (Joan Didion); Maigret’s Memoirs (Georges Simenon); Marion Mahoney Reconsidered (David Van Zanten); The Complete Personal Memoirs of Ulysses S. Grant (U.S. Grant, naturally) and Monet’s Impression Sunrise (Marianne Mathieu).

What’s the last film you watched that rocked you?

The Third Man, only recently restored and re-released for its 70th birthday. An all-time great and certainly the best ever British-made film noir. It never fails to fascinate whenever I watch it, and believe me I do that wherever there’s a ticket to be bought. The themes of Cold War rackets, displaced Americans, love and loss all resonate in Shamus Dust, of course. Not to mention deep winter and the dark disillusion of the times. So I suppose it would appeal to me, wouldn’t it? To this day there are scheduled showings every week at Burg Kino on Vienna’s Opernring, a short walk from many of the locations you’ll see in the movie. Now, if you needed any excuse for visiting Vienna…

TV addict or not? What’s the must watch show in the Roger household?

You can’t know. Those cabins on ferries and freighters I mentioned, and sleeping cars on trains, don’t tend to have them, which is a big plus. But I haven’t watched TV since I left home, at what now seems such a tender age. Partly it’s because of the utter glaze-eyed boredom that sets in as soon as the TV screen flickers. Partly it’s the deadening effect it has on any room, even switched off. I enter no bar or restaurant that has one. If I’m in a hotel room more than a few days I get it taken away and put some flowers in its place. You get the idea.

Janet is an historical fiction author, writing literary crime. She’s published by Troubador Publishing in the UK and represented by JKS Communications Literary Publicity in the USA. She trained in archaeology, history and Eng. Lit. and has a special interest in the early Cold War. Her debut novel, Shamus Dust: Hard Winter, Cold War, Cool Murder is due 28 October and is currently attracting widespread media interest.

Janet Roger is the author of SHAMUS DUST : HARD WINTER, COLD WAR, COOL MURDER - available for purchase on Amazon UK and Amazon US